I really feel sorry for this guy 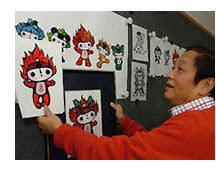 Han Meilin is the designer of the Chinese Olympic Mascots. He not only endured the rigors and pain of having to re-design his characters, but he's now faced with a slightly larger problem:

"Now we learn that a growing number of people in China have started letting superstitions get the better of them and believe that Meilin's Olympic mascots are the fulfiller of horrible prophecies or somehow responsible for the recent natural disasters that have plagued the nation."

Man, that stinks.
I really feel sorry for Mr. Meilin.